Follow Her is a column that allows women on the road to share their treks and adventures with readers in as close to real-time as possible. Each adventure unfolds in a series of linked articles that brings readers along as the writer reveals sights, experiences, and insights from their journey.

This is Carson Poplin’s first check-in after embarking on the Camino de Santiago. You can read her opening piece here.

According to my guidebook, I’ve walked 177 miles since starting the Camino de Santiago in St. Jean Pied-de-Port, France 12 days ago. I’ve just arrived in Burgos, one of the few larger Spanish cities the Camino routes through.

These first days have been an exercise in patience and learning. It’s very easy to get excited during the first few legs and push your body harder than it should be pushed. It’s easy to forget that what follows those days of walking is about 30 more days of walking. Yes, you probably can go another 3 miles to the next town, but should you? Will it actually help you get to Santiago faster? Probably not. Many of the pilgrims I’ve talked to learned this lesson early on, too.

You can always spot a seasoned pilgrim because they seem to already have these things figured out. They never rush along and always enjoy whatever the route brings to them. When I asked one man why he had done this route of the Camino 14 times instead of doing another route, he just said, “Because this one is different every time I do it.” The people you’re with, the time of year, the cities, your body—they’re always changing, and part of the Camino is learning to embrace it.

I’ve been told that the first part of the Camino is a physical challenge, the second part is mental, and the third part is personal/spiritual/religious. I figure I have the physical challenge over with—I still have over 300 miles to walk, but my body has adapted. My legs don’t get as sore anymore and I barely notice my backpack unless I’m hiking up a steep hill. Somehow, I don’t have a single blister, and I’m the only person I know who has escaped this ailment.

The mental challenge awaits me tomorrow. The next two days of the Camino will take me through desert area known as the Meseta Central (inner plateau). I’ll be conquering it alone after spending most of my time so far walking with different people and groups. I’ve enjoyed talking to everyone—the Camino is a real United Nations of people—but look forward to some alone time. I came to the Camino alone so it makes sense to spend part of my time exploring by myself. The landscape is barren and I’ve heard from multiple sources that this is the best time for self-reflection along the Camino.

I’m basically a third of the way done with my journey. I never know what day of the week it is, or what time it is, or what to expect the next day. I’m really just walking, and I look forward to it every day.

The First Stretch of My Journey on the Camino de Santiago 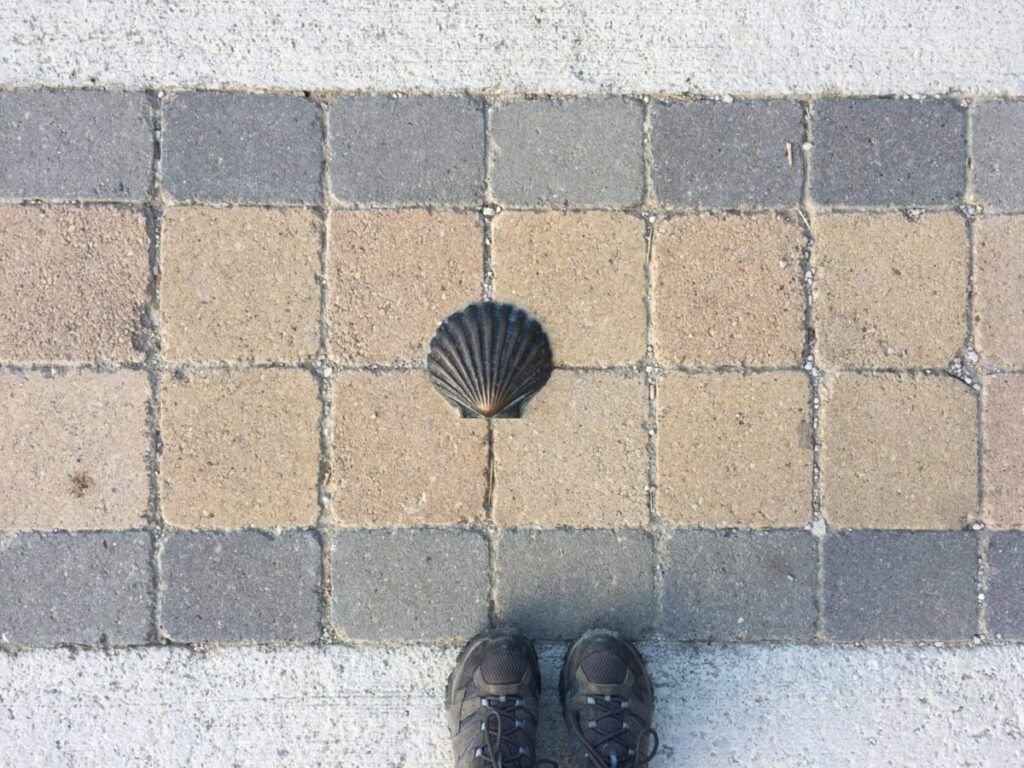 The first thing I did when I got to St. Jean Pied-de-Port was buy a scallop shell to tie onto my backpack—the official symbol of peregrinos! 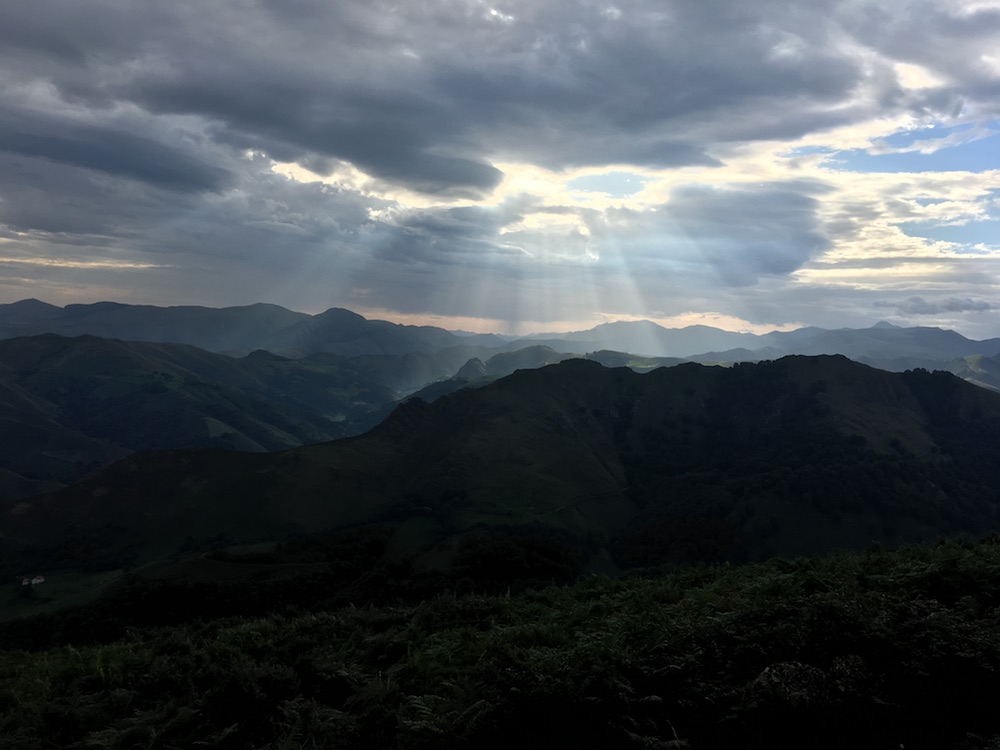 The first day of hiking through the Pyrenees across the French border into Spain proved to be the most beautiful day yet. 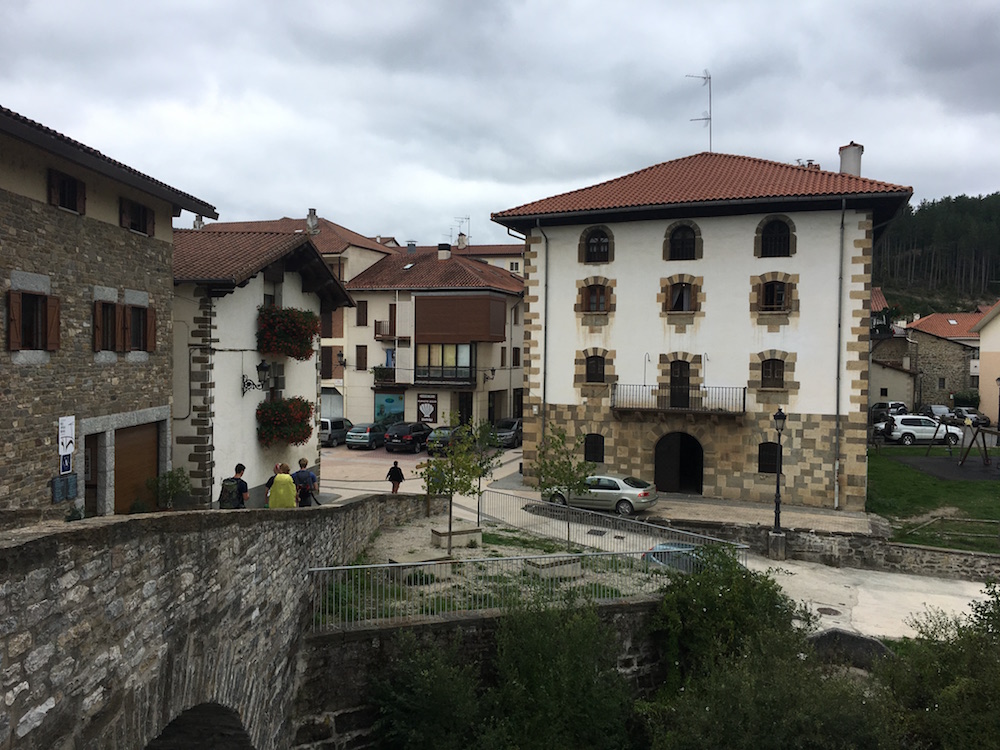 This route takes you through innumerable charming medieval towns like this one, Zubiri. 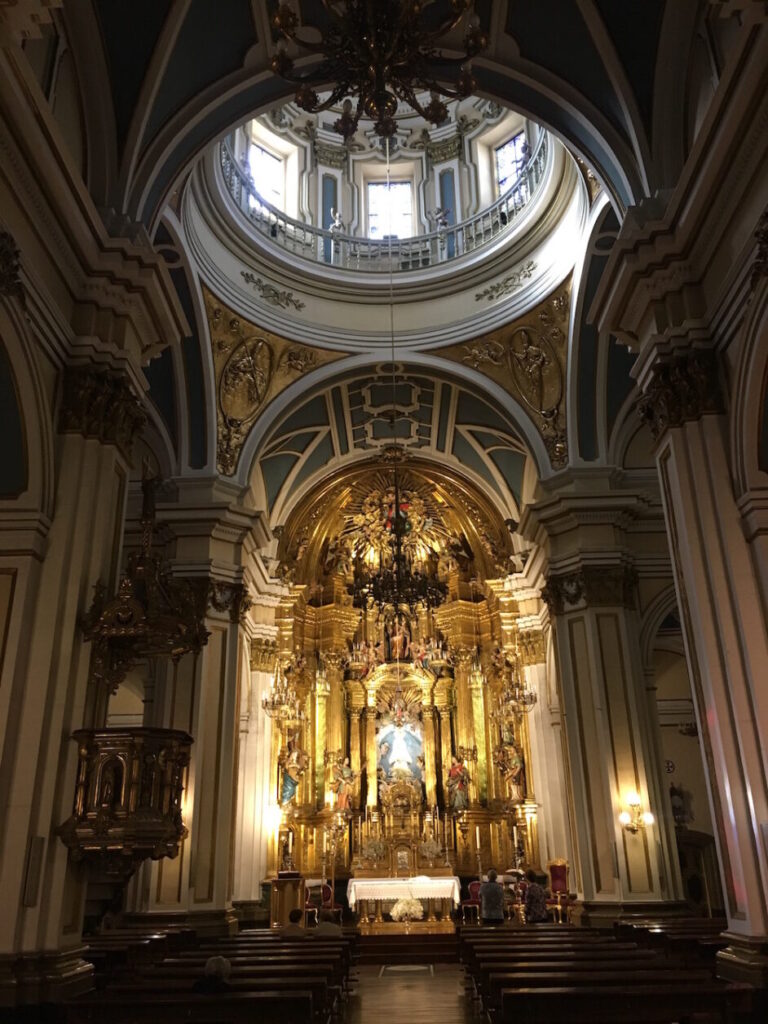 The first large city we passed through was Pamplona. I got my first taste of all the gorgeous cathedrals and churches that would come. 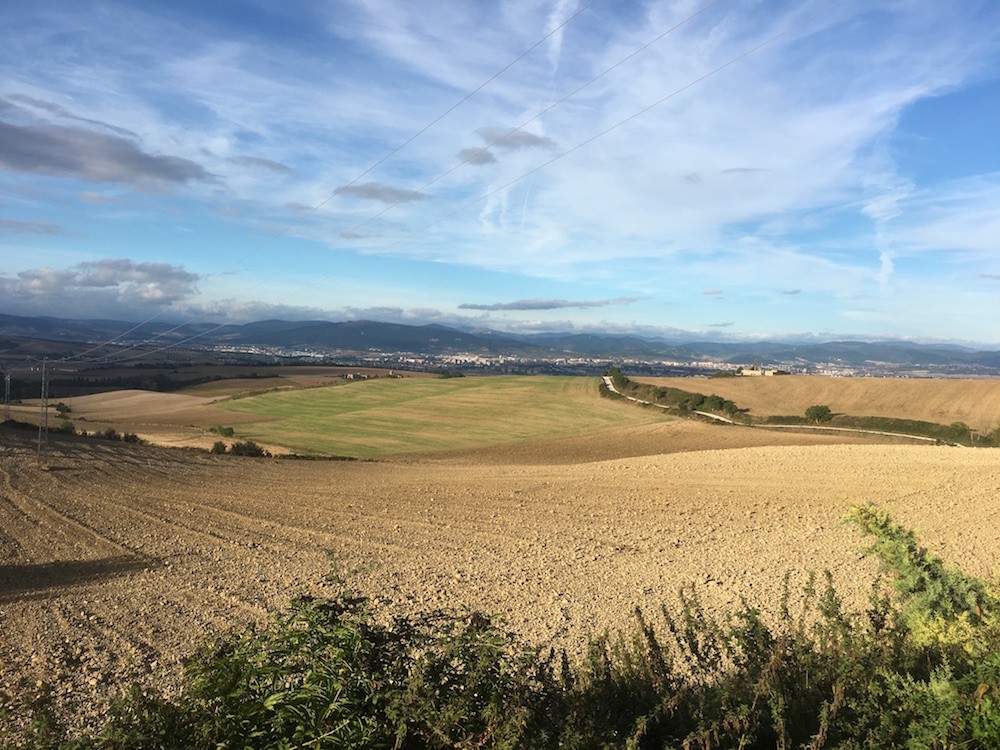 After the Pyrenees, much of the walk was through farmland and vineyards. 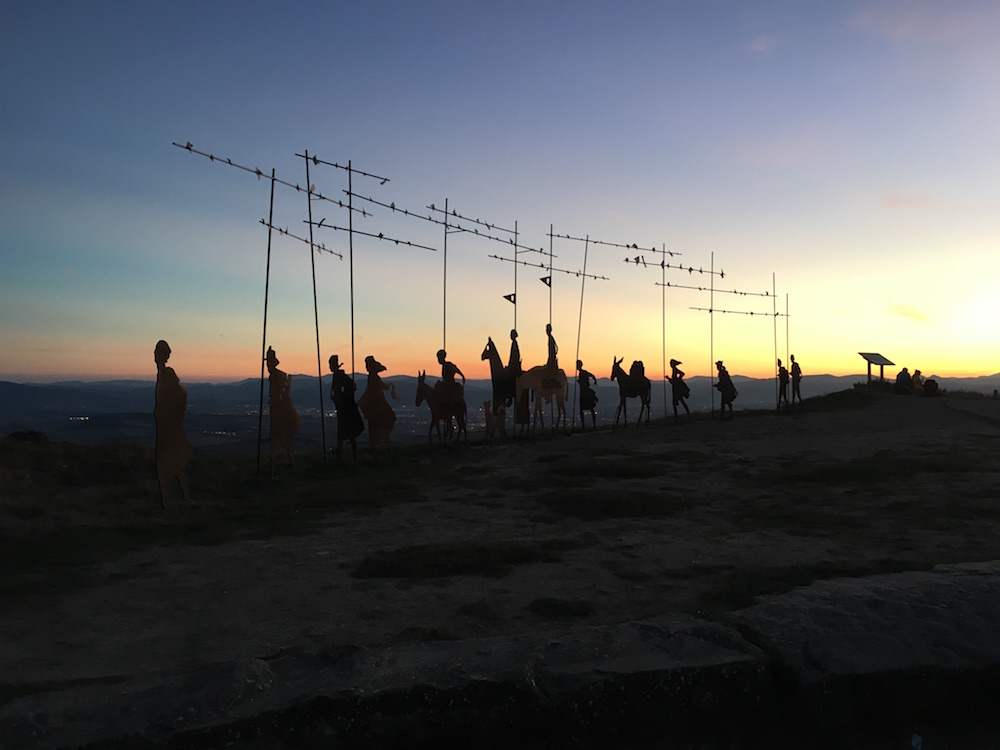 The Alto de Perdón (past Pamplona) at sunrise was a beautiful sight. The top of the mountain has wind turbines along with wrought iron representations of medieval pilgrims. 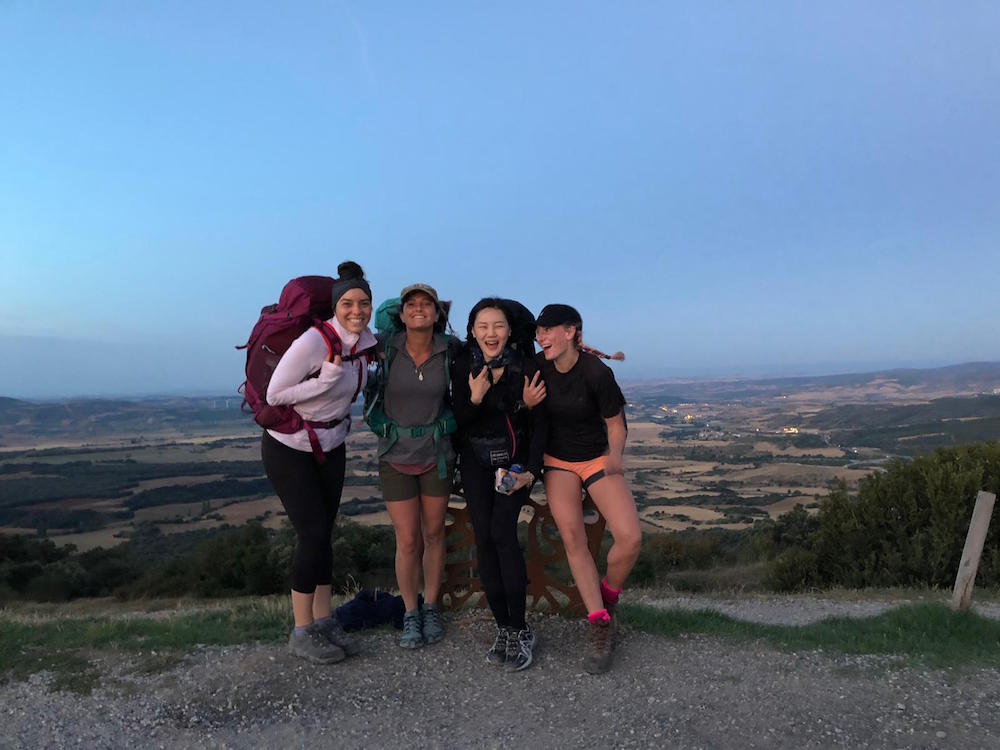 Camino amigas (camigas) on top of the Alto de Perdòn.

The Way of St. James is marked by yellow arrows or the scallop shell symbol on the road, on signposts, or wherever is convenient. This one was on a charming store facade in Agés. 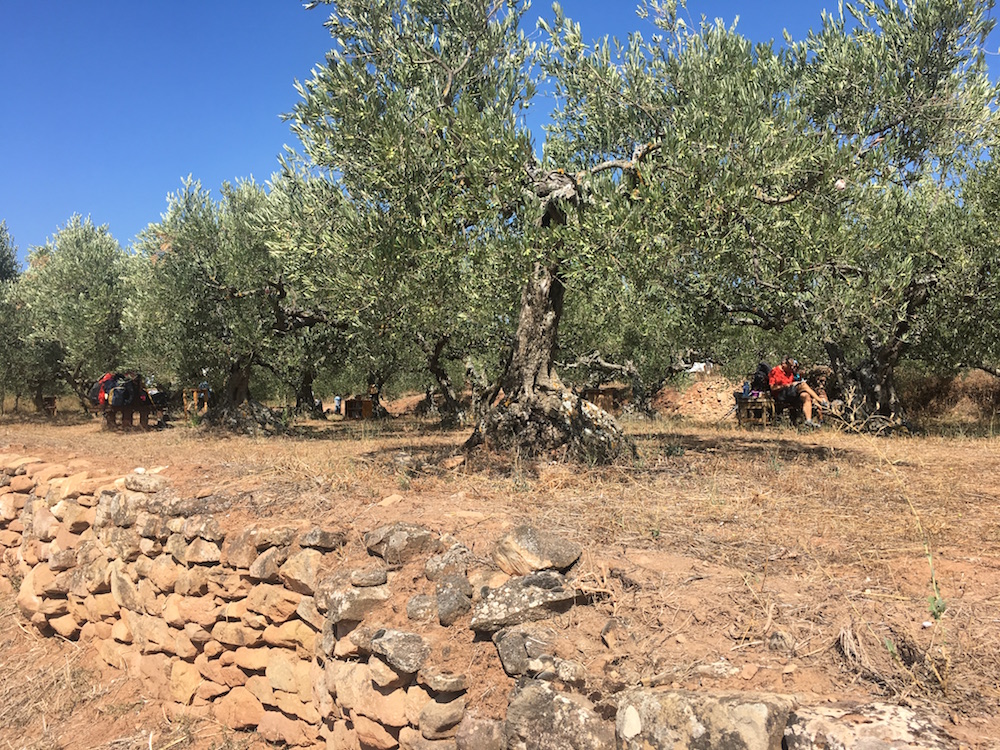 Along the way, there are established stores that cater to pilgrim needs or more casual roadside stands that ask for donations in exchange for food and drinks for pilgrims. This one was especially cool, allowing pilgrims to rest under the shade of an olive grove before pressing forward. 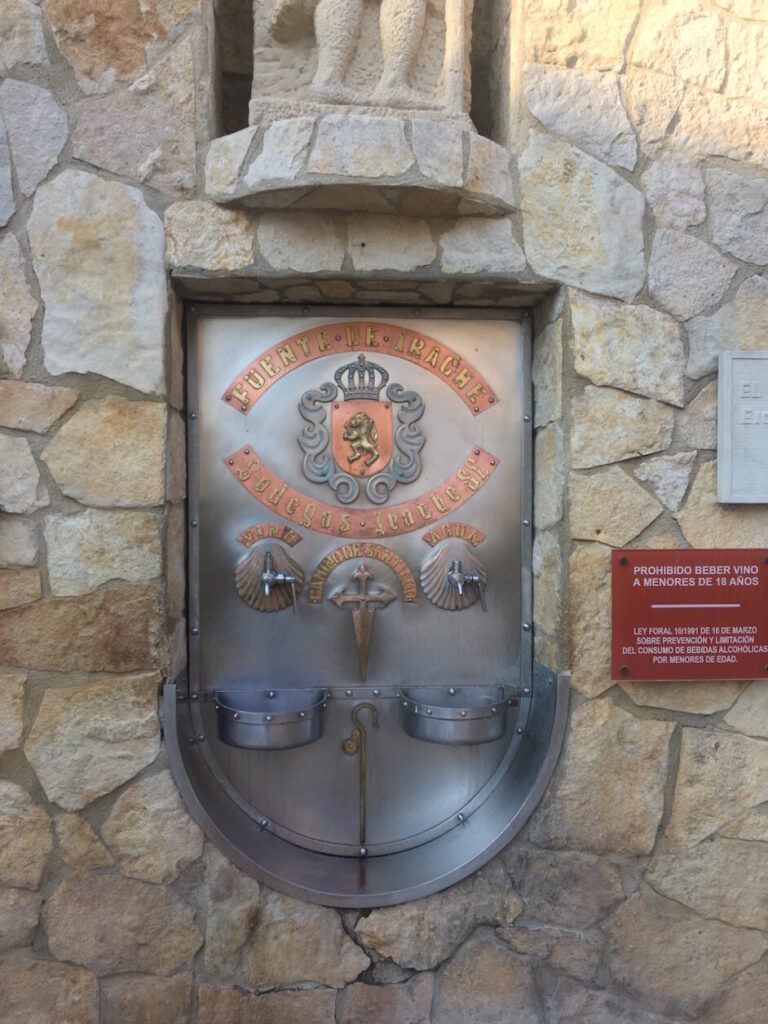 As pilgrims leave the city of Estella, a local vineyard called Bodegas Irache has a wine fountain for pilgrims to pour wine from free of charge. It’s a highlight. 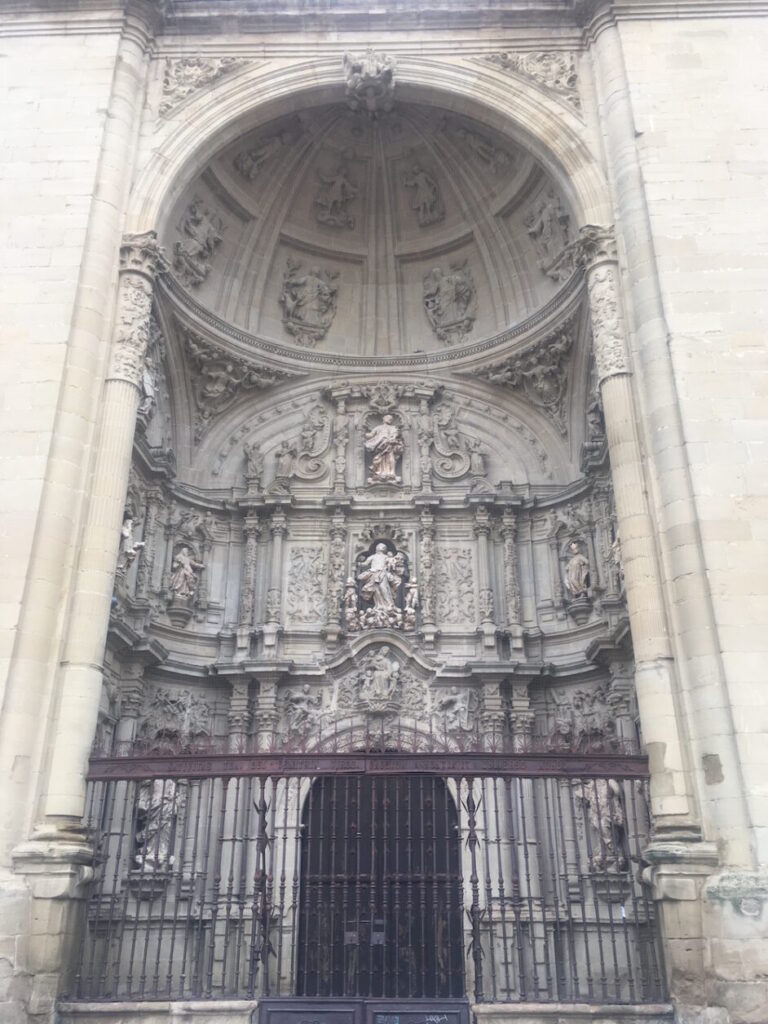 The city of Logroño’s Cathedral de Santa Maria de la Redonda is impressive, but even more impressive is the city’s selection of Rioja wine and tapas. 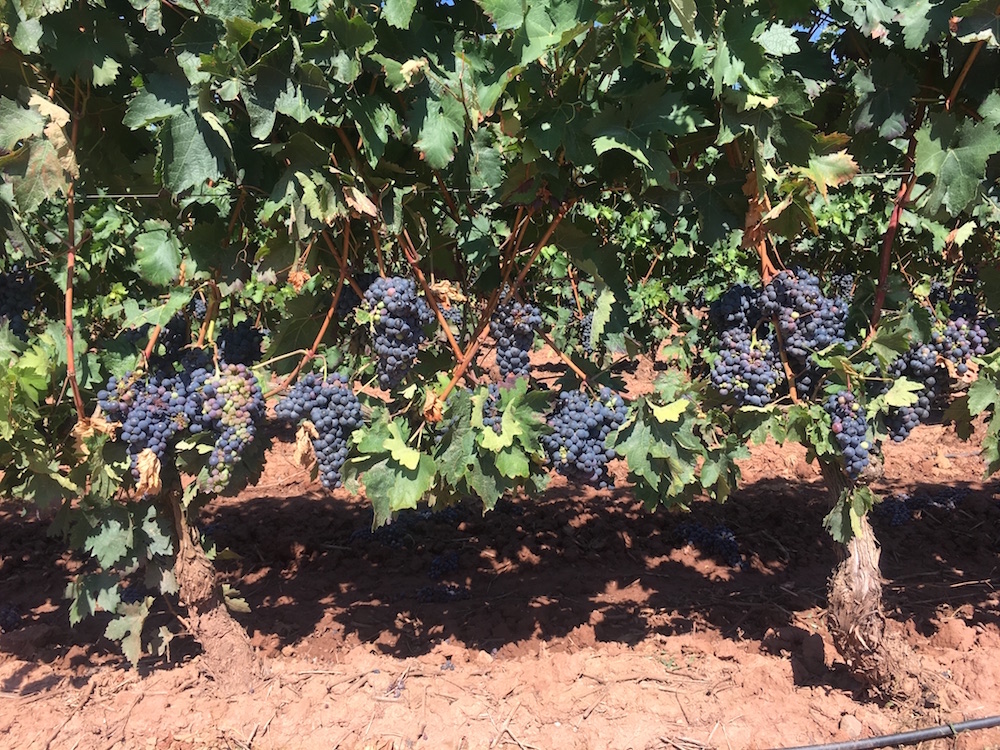 Since the path winds through vineyards for a few days, it’s hard to resist taking a few traps straight from the vine. Shhh…don’t tell anyone! 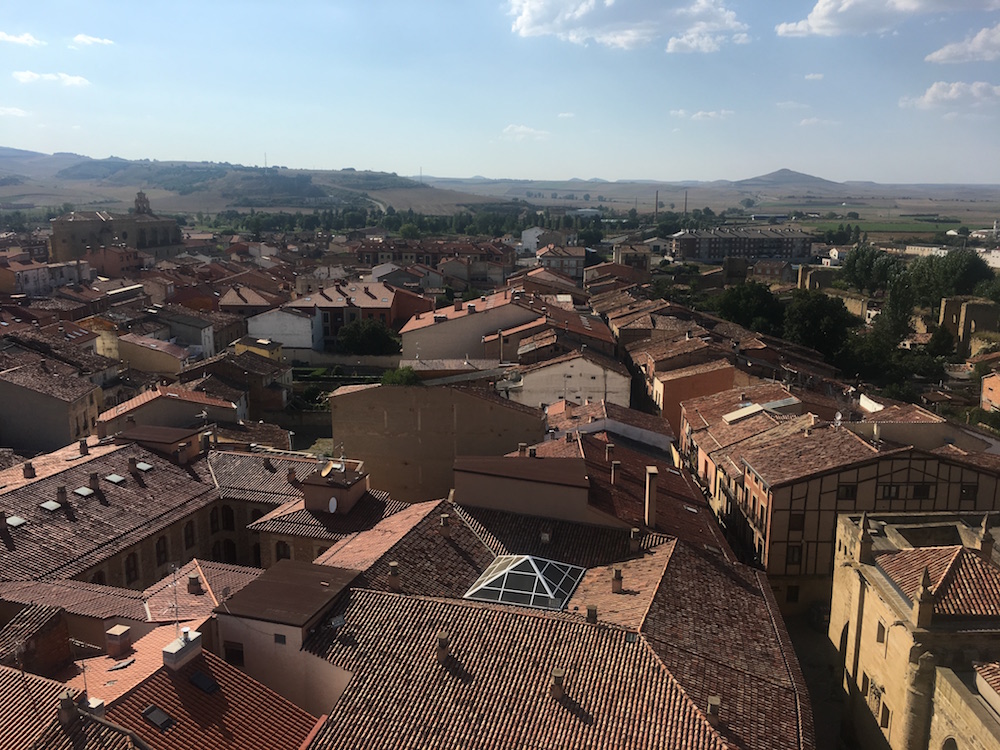 The city of Santo Domingo de la Calzada has been hosting pilgrims for centuries, so much so that the town’s history is entwined with the history of the Camino. 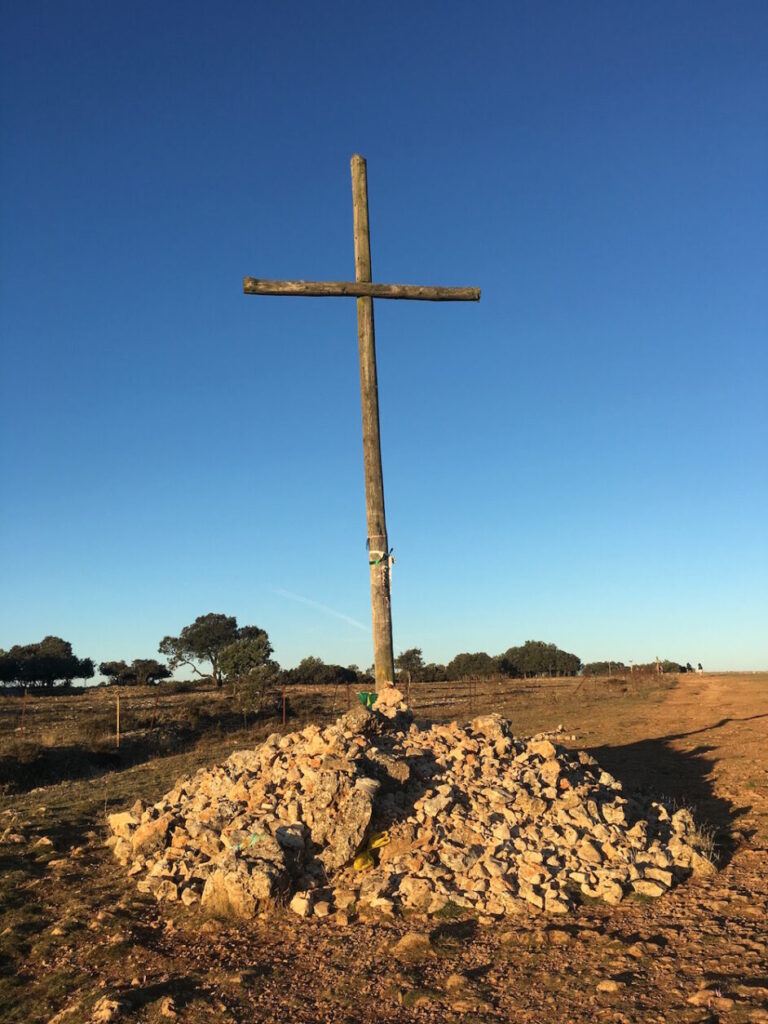 Before reaching the city of Burgos, the Sierra de Atapuerca has a cross for pilgrims to leave behind a stone, notes, or anything they feel like at that point on their journey. This was not the first monument of this kind that I passed, but it is the spot where I placed the first of three stones I brought with me from home. It felt fitting, since I was officially one-third of the way through my journey. 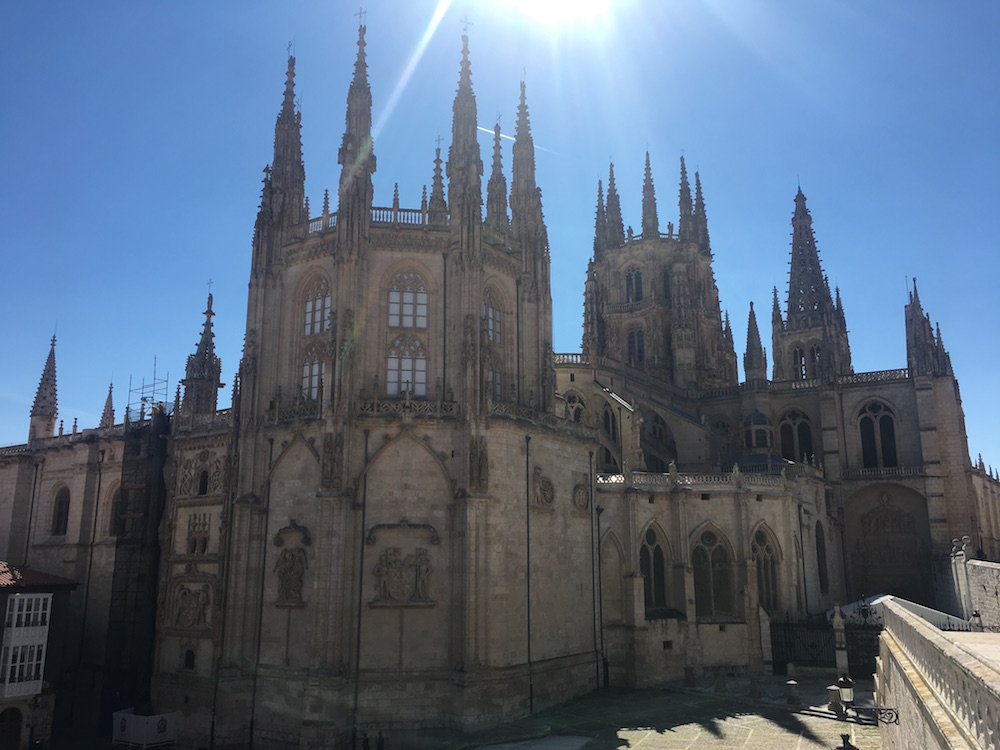 The Cathedral de Burgos is a great reminder of how many people came before you on this journey. The magnificent building has been around for centuries and has adapted to different times and situations the same way pilgrims have.

FOLLOW HER: A HISTORIAN EMBARKS ON THE CAMINO DE SANTIAGO