From regaining the ability to drive to hang gliding: how I made peace with panic

I didn’t know that I had an anxiety disorder until I was in my early twenties. Though looking back I can see how it was always with me. Even as a young child.

While my older sister bravely climbed to the top of the log fences that framed the one-acre field behind my childhood home in Idaho, I kept both feet firmly on the ground. As I forlornly clung to the earth, I’d watch her spread her arms like the wings of a bird taking flight and skillfully place one wobbly foot in front of the other as she made her way around the wooden container that kept our sheep securely corralled. I was only in elementary school then, and I’d already started telling myself, “I’ll never do that.”

Threads of that same story are woven throughout the tapestry of my youth. When the other kids climbed trees to the top, I clung fearfully to the lowest branches. My sister boldly road dirt bikes in the field with the boys from the street. The only time I tried, I froze up and ran the small motorcycle into a fence.

Eventually, I learned to mask the embarrassment of my cowardliness by defining myself as “the kind of person who doesn’t do those types of things”. But deep down, I really wanted to.

At the age of 20, I had my first panic attack while driving from Berkley, CA to eastern Washington, where my family lived. I flew off of the road certain I was having a heart attack, and almost put my vehicle through a gas station’s wall. There happened to be both a fireman and some policemen there. They were sure I was on drugs and searched my vehicle. Funny how anxiety and panic attacks make someone act like they are on crack.

I had multiple panic attacks before I finally made it home. Now, as I look back I am able to laugh at how strange I must have looked to cars passing by: laid out on the side of the highway with two fingers pressed to my throat in search of my pulse—car still running nearby. I guess I really did look crazy—something my future partners would point out after witnessing one of my “episodes.” 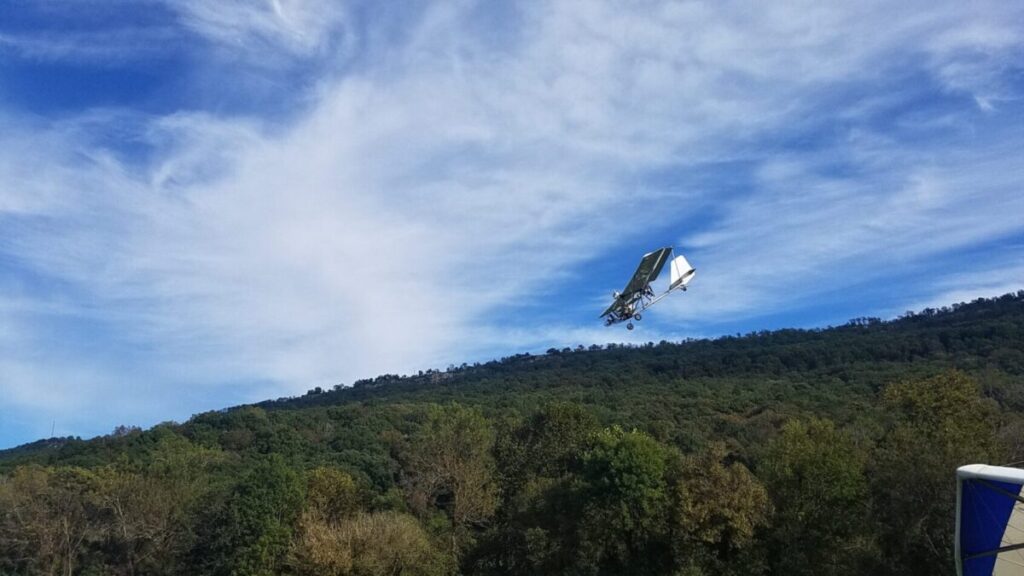 What resulted from that first experience was the emergence of my first official phobia: driving on highways. I couldn’t drive a significant distance alone for years to follow. And on the few occasions when I absolutely had to fly, my parents would get a bottle of Xanax for me from one of their doctor friends—“just in case”.

Over the years that followed, my life closed in on me as I witness my friends spread their wings and find freedom in travel and treks that took them far from home. The list of “I’ll nevers” and “I can’ts” grew and grew, and I started to really believe that a life like my peers’ wasn’t possible. The people around me began to believe it too. 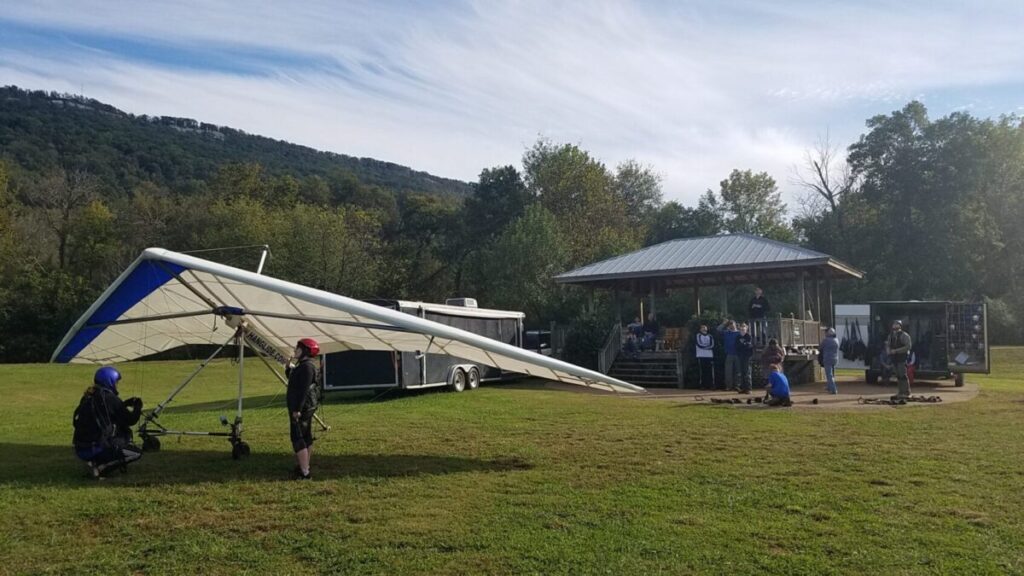 I don’t know what drove me to it—I wish I could tell you there was a definitive moment—but sometime during my last year of college (the first time I attended), I’d had it. My anxiety was at its worst and it was making everything I tried to do seem impossible. Out of desperation, I went to the campus counseling center where services were provided for free.

I got lucky and was paired with a cognitive behavioral therapist who worked with me for months. He told me that I’d always have panic disorder, but that it didn’t have to run my life. He gave me tools to help me recognize the approach of, and calm my panic attacks. And he helped me put together and execute a step-by-step plan designed to conquer my phobia of driving. By the time I graduated, I was able to go short distances on highways alone, and I eventually regained the freedom to explore the wide-open road.

It’s been about twenty years since the foundation that supported the “I’ll nevers” and “I can’ts” began to crumble. And It was a series of small steps forward and terrifying backslides that led me to Lookout Mountain Hang Gliding in Chattanooga, TN a couple of weeks ago, where I found myself signing my life over to a cheerful crew of people eager to help me experience flight.

Admittedly, I’ve now been on plenty of plane rides without a bottle of Xanax (though I still hate flying). I’ve been on a helicopter ride and zip lining…but this felt different. This felt like the real deal. Something not everyone and their dog would do. And certainly not something someone with panic disorder would ever dream of doing.

A true bucket lister for the brave. Was I brave? 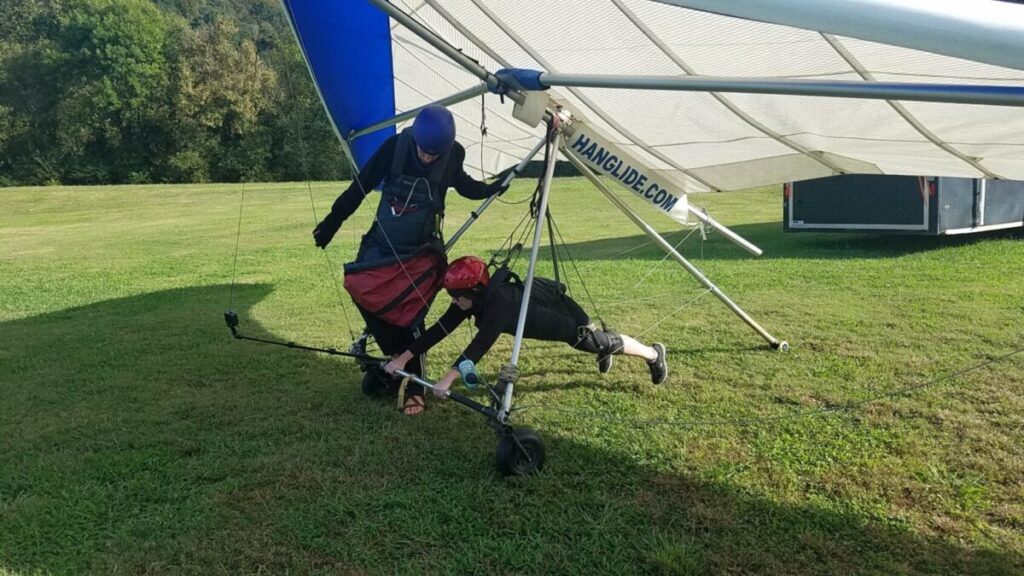 Earlier in the day, the hang gliding company had called me to tell me the flight might be canceled because the wind was too strong. I secretly spent the day wringing my sweaty palms, using all of the anxiety management tools I have and hoping to god the experience would be canceled.

So there I was at the top of Lookout Mountain staring at the hang gliding ramp’s drop off and thinking, “How the fuck am I going to do this?”

Fortunately for me, I was going on a tandem flight with a skilled pilot, meaning I would not be hang gliding alone or jumping off of a ramp. Tandem flights start on the ground at the landing point where a plane is attached to the hang glider by a long cable. It pulls the glider up into the air where it is eventually detached for the ride down. You can choose between a 1500’ or 3000’ adventure. I told the man in the office I definitely wanted to stick to 1500’.

After filling out the necessary paperwork, I drove down to meet my pilot. The scenic drive to the launch point was a nice distraction. But once I was there, the wait was excruciating.

Side note: Chattanooga is absolutely stunning this time of year (autumn). I felt fortunate for the opportunity to witness the landscape in transition. It’s well worth the trip just to see the changing colors of the leaves and grasses in such a lush locale. 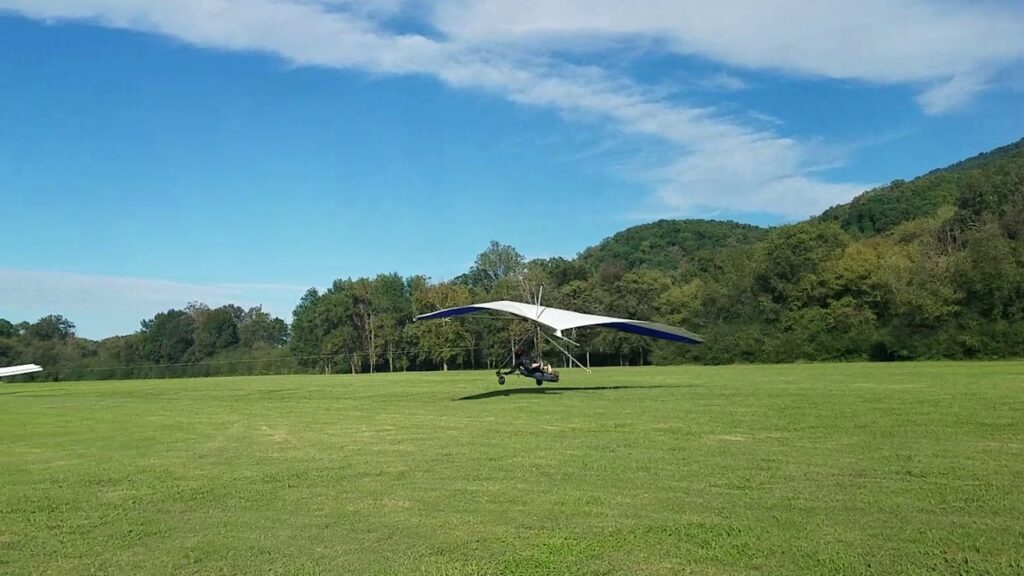 At the landing pad, I met a group of people, some of whom had flown before. They assured me it would be awesome. But somewhere in the back of my mind, that familiar voice began to whisper, “What if you have a panic attack 1,500’ up in the air?” it asked. A fair question really.

One of the women in the group was well acquainted with the hang gliding company. We chatted for a bit about hang gliding, how the pilots were trained, and how different customers reacted to flights. I casually asked, “So what does a pilot do if someone freaks out in the air?” She told me they were actually trained to deal with the worst-case scenarios (people who lose their shit) in flight. It’s part of their training.

She explained that during training, pilots were sent up with a large guy who simulated a customer freaking out while attached to them at 3000’. Knowing this reassured me quite a bit. It stood to reason that if they were trained to handle a large man, then they could likely manage all of my five feet of freak out.

I was the first in the group to fly. I’d be lying if I didn’t admit that the ground felt a little shaky under my feet as I walked to the hang glider. I tried to smile and look casual as the pilot gave me instructions and began to hook me up. At one point, I looked him in the eye and said, “Um, I’m kind of nervous.” He just smiled and told me it was ok.

Once we were hooked up and my arms were looped around him clenching the handholds on his suit, he asked me if I was ready. I’m not sure what I said, but the plane began to pull us and off we went. 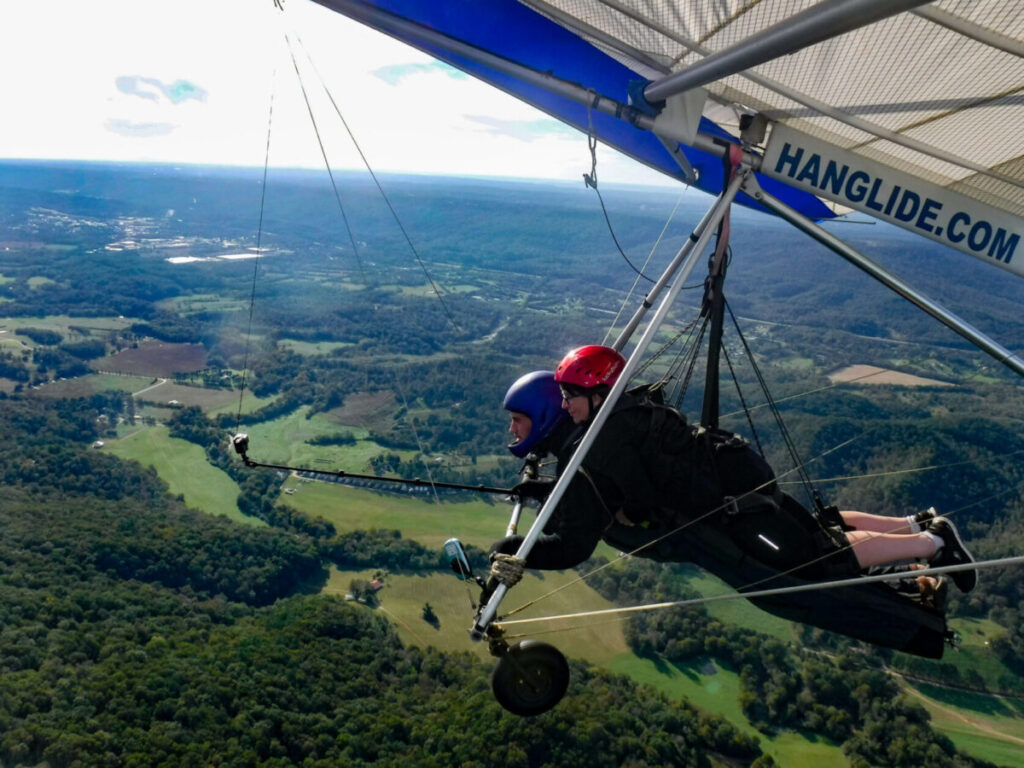 As our craft left the ground I braced for panic to set in. The earth moved further and further away from us, and I began to realize I wasn’t afraid. Then I began to wonder, “Why am I not afraid?”

It was a perfect fall day in Chattanooga: sunny with blue skies — I could see for miles. Looking around, I was overwhelmed by the beauty. My chest felt like it was expanding as I attempted to drink in the entire experience. I couldn’t believe how beautiful the world was from this perspective. It was easy to fall in love with it.

We climbed to 2000’—higher than I had expected. Right before we disconnected, I have to admit, I felt a little tingle of, “Whoah, this is high.”

The pop of the hang glider disconnecting from the plane gave me a little jolt, as did the change in speed. It felt like we had come to a sudden standstill. Then the pilot angled the hang glider down and our untethered decent began. It occurred to me that this is the closest I’d ever get to experiencing what it was like to be a bird. It is one of the best feelings I’ve ever had.

The pilot offered to let me take control and I declined. I felt like I had accomplished a lot just by being there and I wanted to enjoy my success. As comfort set in, I even got chatty. Yes, there I was at 2000’ having a casual conversation.

Perhaps I seemed too comfortable because the pilot really wanted to give me a thrill ride: something I had no interested in. But when he asked, “You know that thing a hawk does when he’s hunting for food and sees his prey? How he stalls midair and dives? Do you want to experience that?” well, I couldn’t resist. I’m kind of obsessed with birds, but that’s another story.

So just like that, the roar of the air stopped, and it felt like we were floating in place just before we dove! It was awesome.

That’s when I decided to give my pilot a thrill of his own. I said, “Hey, you want to hear something crazy? I have panic disorder.” Then, I went on to give him the quick version of my story and took just a little bit of pleasure in the slight hesitancy that interrupted his calm, steady voice as he slowly began to realize the potential shitshow he had strapped to his back.

The experience was truly incredible and I felt sad as I saw the flight coming to an end. Before I flew, I decided to get photos and a video of the entire experience as planned to never, ever do it again. But before the wheels of the glider touched ground I knew I would jump at a chance to do it again.

8 TIPS FOR TRAVELING WITH ANXIETY

20 THINGS WE NEED TO STOP SAYING TO WOMEN WHO TRAVEL

A WOMAN’S GUIDE TO MT. RAINIER

One Reply to “Hang Gliding With Panic Disorder”